In the 4th episode of Radio Romance Kdrama, Ji Soo-Ho has a nice trip with Song Geu-Rim and Lee Gang, but he leaves in the trip without informing them. Then Song Geu-Rim finds out he didn’t read the script she wrote while broadcasting. 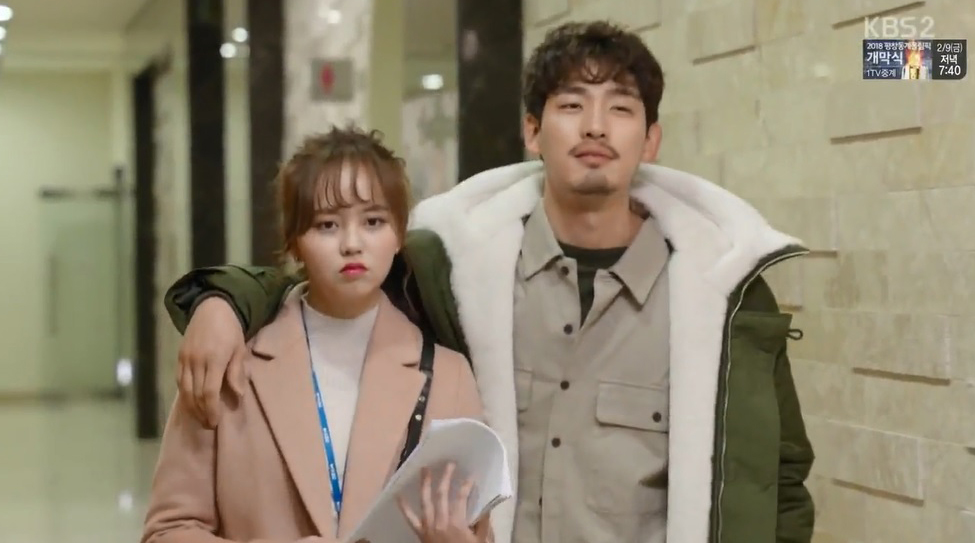 Soo Ho is told that he will have an overnight trip with Geu Rim and Lee Gang while they drink. He knows they live together and asks Lee Gang why he calls her a newbie since she is the main writer, Lee Gang reveals she is a newbie to him in his mind. Geu Rim sees Soo Ho off and tells him that she will visit him the next day.

Soo Ho doesn’t know what to do after hearing Geu Rim and Lee Gang will work all night, Doctor wants to go since he knew it’s an overnight trip. Geu Rim tells Soo Ho that he cannot drive his car because the place cannot be reached by GPS. Then he realizes they are going to take the ferry after they arrive, Lee Gang takes other colleagues welcoming him.

Geu Rim thinks Soo Ho might get motion sickness because he has been frowning after landing the ferry, he denies it. Just then Lee Gang gets sick, Geu Rim takes out the needle to sting his thumb. Joo Ha sees Tae Ri talking about something with a report while taking photos, she shoots eyes to Joon Woo. Joon Woo threatens to hurt the report after knowing he is asking Tae Ri about Soo Ho. Joo Ha asks Da Seul to have dinner with her family, Da Seul is nervous after hearing what she said. Tae Ri holds the bag for Joo Ha and threatens that she will tell report everything she knew to the reporter if she doesn’t let her stay with Soo Ho.

Soo Ho complains to Lee Gang about his plan after knowing they have to walk to the destination on a snow day, but Lee Gang thinks it fits radio philosophy and makes them feel the voice of nature. Geu Rim finds out she dropped her laptop at the dock, Soo Ho takes a walking tractor with her to the dock.

Joo Ha thinks she needs to let Geu Rim quite if she wants his son to give up the radio show and recalls there is another team that is against Lee Gang’s team. Ms. La gets a call from Joo Ha while she is discussing with Seung Soo regarding their show.

Geu Rim gets her laptop at the dock and returns to the destination with Soo Ho. He recalls their first meet while they ride the bus. She reveals why she loves radio, but they are told that they are in the opposite direction. They run into a weird grandpa who tells Ji Soo that he has waited for him so much time on the street while Geu Rim contacts Lee Gang.

Grandpa keeps Ji Soo and Geu Rim in his house and mistakes him as his son, and treats them with delicious chicken. Joon Woo pulls Tae Ri outside night club when a guy is touching her. She asks him why he cannot tell her Ji Soo’s location and thinks he betrayed him 12 years ago.

Grandpa asks Ji Soo to read the postcards he didn’t send and sleeps with him. Ji Soo finds out Geu Rim is sitting outside and writes her script when he goes out. She invites him to read it together and reveals he is her first reader.

He carries her into the house after she falls asleep. Ji Soo dreams a boy was dead because of him and called Joon Woo. Geu Rim is informed by grandpa that Ji Soo left, but they don’t know where he is after running into Lee Gang and Doctor. She is curious why he doesn’t have a phone.

Joon Woo is very happy that Ji Soo remembers his number since he doesn’t have a phone, Ji Soo reveals he cannot forget the day he called him many times, but he didn’t get his reply. Joon Woo lets Ji Soo get another manager since he isn’t comfortable because of him.

Joo Ha tells Ms. La that she can give her any support which she wants, but she has one condition that Ms. La has to let Geu Rim leave the radio station. Geu Rim knows Ji Soo returns home from Doctor and lets him tell Ji Soo that the script she sent to him and asks him to check it.

Hee Seok talks about something Lee Gang cannot understand, Geu Rim tells him that his means is he will kiss us if we mess the show. Lee Gang thinks his boss is too nervous. Ji Soo arrives in the end, but he doesn’t read the script Geu Rim wrote.

Lee Gang laughs loudly and thinks he did a great job. Geu Rim thinks Ji Soo should read her script before making the decision, then she gets in Lee Gang’s car and is going to have a drink. Ji Soo stops her.